A bit of history

If you know me or have followed my newsletter for a while, then you know I move a lot! Yoga, hiking, backpacking, cycling, running, and dancing are all a part of my life. That’s not to mention more mundane movement like walking the dog or working in the garden. Functional movement and resiliency in my body are important to me. So when I first experienced receiving the full 10 structural integration massage therapy sessions and saw what they did for all of my movement activities, I was amazed. I knew I had to learn structural integration massage therapy, so I could share it with others.

Fast forward a few years and I’m still fascinated by what structural integration massage therapy offers. Since first learning the basic approach, I’ve continued to study and learn more. I’m always interested in how I can best tailor each session to meet the individual client’s needs.

For that reason, last July I traveled to Maine to study movement in a small group 3-day intensive on assessing movement patterns with the amazing Tom Myers himself of Anatomy Trains. If you’re not familiar with Tom Myers, he’s spent most of his life studying structural integration, movement, and the body. You can learn more about his work HERE.

What is functional movement?

“Functional” to me suggests a kind of ease, as in not using more work than necessary to accomplish a movement or action. I’m definitely not the first to have that idea. Ida Rolf herself (the originator of structural integration massage therapy) had the perspective that the patterns we acquire in our body that resist gravity require more of our effort than we need to use. How do we acquire those kinds of patterns that end up with us fighting the field of gravity? Daily habits, sports, repetitive motions at work, accidents, injuries, trauma, and other situations of life.

What’s the result of body patterns that take us out of gravity? Less resiliency — a body that is less able to adapt to a changing environment. Ida Rolf pioneered structural integration massage which was intended to bring the body back into harmony with gravity.

But she was not the only one who had that idea. In the small group workshop with Tom Myers, we explored basic concepts of some elemental functional movements that Tom learned from Moshe Feldenkrais. What are those elemental movements? 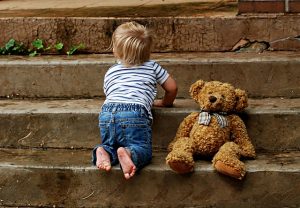 Image by Laura Retyi from Pixabay

These are functional movements that very young babies do. So that turns the idea of needing to be “strong” for movement on its head. What we actually need to do is relearn (because this is likely something we already learned once as a small child) how to move efficiently in gravity. As Tom Myers coached our group through the process of re-learning these movements in an easeful way I found the process fascinating.

What had happened over the decades since first learning to roll over, sit up, and stand up, is that I had laid down habits of unnecessary control. I was using far more muscular effort than was necessary. I wasn’t moving efficiently.

Perhaps more importantly, was what that control replaced—and that was listening. By exerting top-down control over my movements, I drowned out some of my proprioceptive voice telling me from the inside out where I was in space. Needless to say as a massage therapist, yoga teacher, and movement enthusiast, that understanding was very eye-opening.

Relearning the importance of resiliency

What do we gain by re-learning the efficiency of elemental functional movements? Resiliency.

Tom Myers told us a story about attending a social event with Moshe Feldenkrais. As Mr. Feldenkrais started to sit down on a small stool, it broke underneath him. But, he didn’t fall. Because of the way he had learned to transition his weight when doing fundamental movements like moving from standing to sitting, he was still in control of his center of gravity, even when the stool broke. He was able to gracefully remain upright and balanced.

Practically, where does this idea of easeful, proprioceptive functional movements come into play?

This idea may be especially relevant as we age. But even before then, it can help us move through space in a way that takes in more of the information from our environment and has us more wired to respond to that information. Think of less falling over tree roots on bumpy hiking trails and less slipping on ice in the winter. Think about more ease and ability to get down and up from lying down and sitting as we age.

If you’re intrigued by these concepts, try out a Feldenkrais workshop. There are many experienced students of Moshe Feldenkrais that teach these skills. You can learn more about his work HERE.

Or simply make an appointment for some structural integration massage therapy and start bringing your body into a new relationship with gravity!